The Knee Injury and Osteoarthritis Outcome Score (KOOS Score) was developed by Roos et al. in Sweden and first published in 1998 in order to create an adequate score that evaluates the functional status and quality of life of patients with any type of knee injury who are at increased risk of developing osteoarthritis, i.e. patients with anterior cruciate ligament (ACL) injury, meniscus injury or chondral injury.1

Contrary to validated scores at the time, this score is adequate to both older and younger patients.1

Patients with anterior cruciate ligament injuries and/or meniscal damage have a significantly higher risk of developing post-traumatic osteoarthritis of the affected knee in later life.2

The KOOS takes this into account and, as a Patient-Reported Outcome (PRO) instrument, it tests the impact of these clinical pictures in its content over 42 questions. It assesses possible limitations of patients with the above-mentioned knee injuries over the following 5 different dimensions:

Score Calculation of the KOOS

First, one assigns the answer choices their pre-defined point values:

Then the calculation is made using the following formulas: 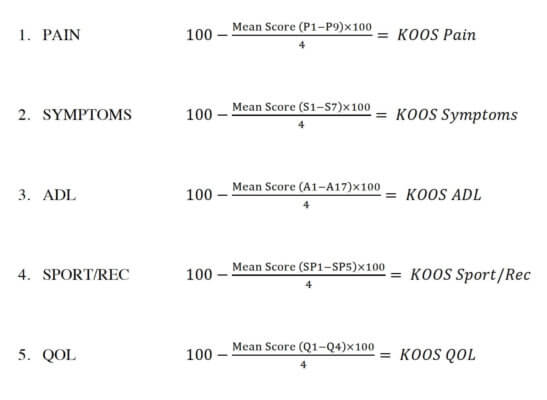 Evaluation of the KOOS

The KOOS score is a validated and established patient-reported outcome instrument that is commonly used in clinical research as well as inpatient care.4-7

However, its major strength is that it captures not only the short-term effects of knee injuries but also their important long-term consequences, namely post-traumatic osteoarthritis.4 The inclusion of the WOMAC PROM within it lends KOOS this benefit and so scores relating to long-term pain, stiffness, and function of the knee in the elderly population can be derived from it which can be informative when prescribing medications/evaluating the benefit of additional interventions.8

It is also available in over 30 languages making it internationally accessible.9

Comprising of 42 questions, the KOOS is regarded as being a long PROM to complete. Patients take an estimated 8 minutes to complete a KOOS questionnaire, which requires good time management or ideally electronic data collection in inpatient care settings.10 This factor can also hinder patient engagement with this PROM, thus affecting response rates.11

The Knee Injury and Osteoarthritis Outcome Score – Physical Function (KOOS-PS) is a more succinct version of the KOOS, published in 2008 and was intended to provide an efficient measure of physical function from early to late disease for people with OA.12-13 KOOS-PS also contains the sub-scales “activities of everyday life“ and “functionality in sport and leisure“ of the KOOS score, which is composed of a total of 7 questions.13

Use of the KOOS does not require licensing and is therefore free of charge.10 Our PRO consultants happily provide more in-detail information.

WOMAC, OKS, and KOOS were identified as being used frequently (top 7 of all PROMs), with OKS and KOOS being most commonly employed in Europe.14 The KOOS, as a validated and established PRO instrument, compares favorably with other knee scores for tracking knee injury therapy. For example, the Lysholm Knee Score only looks at short-term sequelae, whereas the WOMAC score only assesses long-term sequelae.

However, the KOOS is ultimately able to combine the short- and long-term sequelae in a meaningful way, which gives it a notable advantage in common clinical practice.

Regulatory Insights: Potentials, use cases and regulatory side of Real World Evi …

White Paper: PROMs of the Hip

Doctolib and Heartbeat Medical partner for quality-centered patient portal under …

White Paper: PROMs in Osteoarthritis of the Knee