In 2005, a task force was formed within the so-called EuroQol group to further develop and thereby improve the EQ-5D-3L. The concrete goal was to increase the sensitivity and reduce the ceiling effect. Their efforts eventually resulted in the EQ-5D-5L as the successor to the EQ-5D-3L.1

The task force decided to keep the number of 5 dimensions and to increase the number of response options from 3 to 5 “levels”. The reason for this was the evidence from 25 years in use which could confirm the validity of the 5 selected dimensions.1-6

The EQ-5D-5L, like its predecessor, is a Patient Reported Outcome (PRO) instrument that uses 6 questions to generally assess patients’ quality of life, regardless of existing medical conditions. It also includes a vertical EQ visual analog scale (EQ VAS, 0-100 points) and a descriptive EQ-5D-5L system. The latter considers the following 5 dimensions or subscales over 5 levels or response options each.1

Evaluation of the EQ-5D-5L 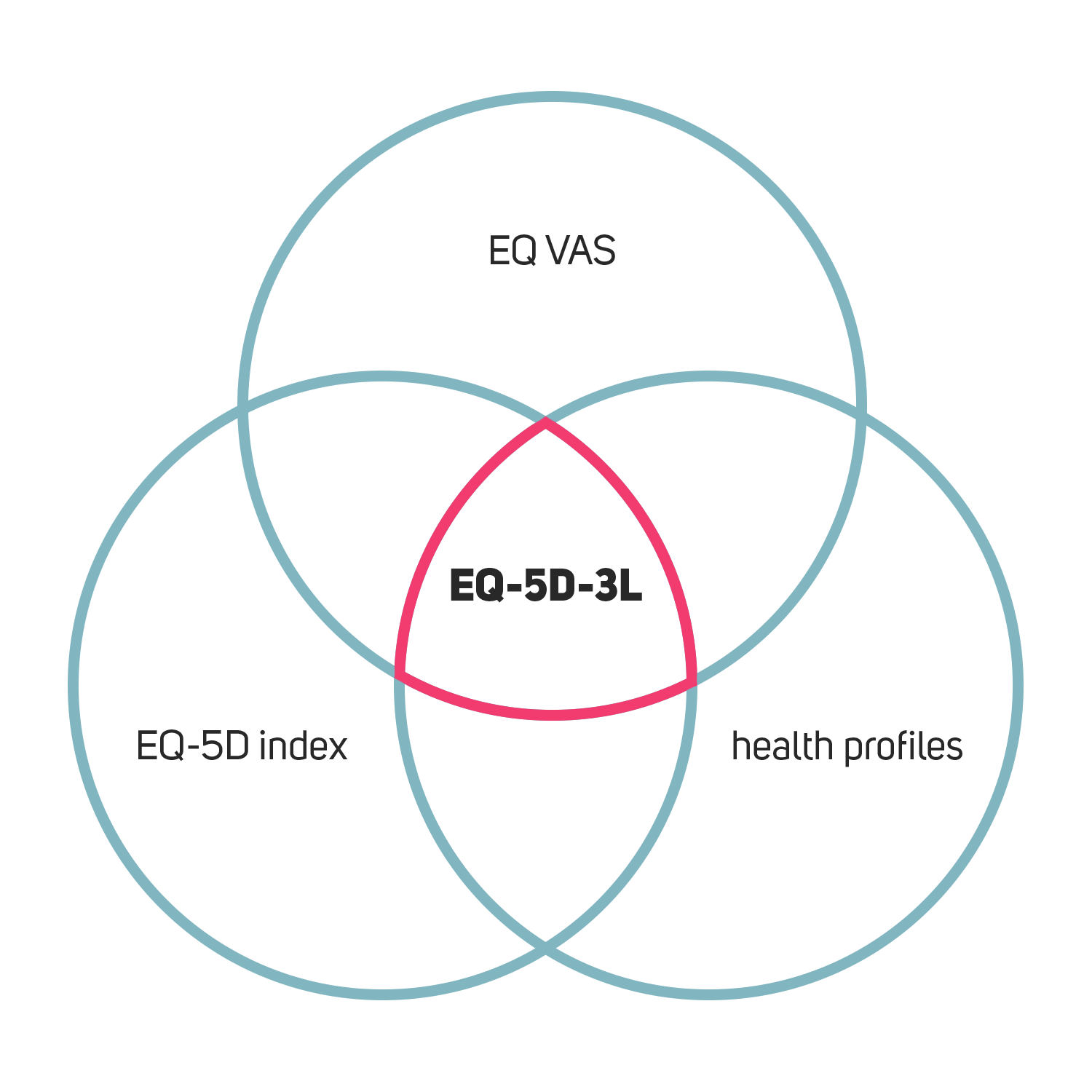 As with the EQ-5D-3L, the descriptive EQ-5D-5L system defines so-called EQ5D Health States. A total of 3125 (55) different health states can be recorded. Depending on the level, a number is assigned to each dimension, so that a 5-digit number combination is obtained.

This 5-digit number can be converted into a score using a special algorithm that is not publicly available. This point value is called the EQ-5D-5L Index and represents the patient’s health status. The algorithm used to calculate the EQ-5D-5L Index is based on the state-specific scores for the EQ-5D-3L. Via crosswalk studies with a collective of 3691 patients, an adequate link between them has been established and presented in mathematical functions for calculation. Thus EQ-5D-5L crosswalk value sets were created, with which one can calculate the respective EQ-5D-5L index on the basis of the EQ5D health states or their 5-digit numbers. An index value of 1 represents the best possible health state, while an index value of <0 (variable) represents the worst possible health state.

Due to the non-public algorithm, we cannot make any statement about whether the respective concrete EQ VAS score plays a role for the calculation of its EQ-5D-5L Index.

The EQ-5D-5L is a validated and established questionnaire, which can be implemented in clinical research and patient care without major effort due to its small content.7-14 Studies of EuroQol members could further show that it has a higher statistical reliability and sensitivity compared to the EQ-5D-5L, while its ceiling effect is lower. Last but not least, it is able to distinguish between many more health states due to its finer subdivision of response options, making it even more meaningful.15-18

Use and analysis of the EQ-5D-5L requires a license. The amount of the license fee depends on study type, funder, cohort size, and language.20 Our PRO consultants will be happy to provide more detailed information.

Main differences between the EQ-5D-3L and EQ-5D-5L

The EQ-5D-5L differs from the EQ-5D-3L in the following aspects:

Overall, the EQ-5D-5L is a successful further development of the EQ-5D-3L, which has been validated many times and is widely used to date. Its strong validity combined with its small size provide ideal conditions for efficient use in clinical research and patient care.

Regulatory Insights: Potentials, use cases and regulatory side of Real World Evi …

White Paper: PROMs of the Hip